The end of the SIM card

Remember floppy disks? Nowadays, we wouldn’t dream of storing our data on such a bulky storage device. In fact, even the humble USB stick’s use is dwindling as everything heads to the cloud. But we all still use SIM cards, don’t we? Not for much longer — Apple has removed SIM card trays for all its iPhone 14 models in the US, in what appears to be the start of a mass adoption of eSIM technology.

At the moment, this eSIM-only capability is limited to iPhone 14 models in the US. However, Apple’s iPhone and several other smartphone brands have boasted eSIM compatibility for some time — but this is the first time a device has said a complete farewell to the physical SIM card. But why, and what are the benefits?

SIM cards and have been helping users access mobile services securely since 1991. Inside the card sits a programmable integrated circuit (IC) chip called a Universal Integrated Circuit Card (UICC) that stores the SIM’s authentication parameters, including subscriber credentials and network authentication keys. Without it, the user cannot access the details of their mobile plan.

An eSIM, or embedded SIM, is a digital alternative that allows the user to activate a cellular plan from their mobile operator without the need for a physical card. Instead of inserting a SIM card into the mobile device, eSIM users can either by downloading credentials via a QR code or through an app created by their operator. 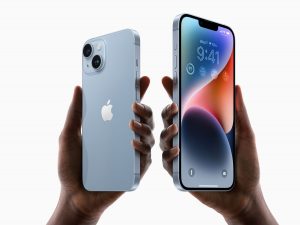 There are several advantages to using an eSIM. First, the customer onboarding process is made more streamlined for both consumer and operator. The instant, digital onboarding that eSIM facilitates means customers do not need to wait around for their SIM card to arrive in the post before they can use their new device, nor do service providers need to consider the cost of their postage.

This supports a secondary, but important sustainability benefit. In 2020 alone, some 4.5 billion SIM cards were produced globally. Given the GSMA reports that 5.34 billion people across the globe currently use a mobile device, that’s a colossal amount of plastic that simply doesn’t need to be produced if mobile operators favour digital methods.

Perhaps most importantly for businesses, eSIMs facilitate a smarter, sleeker way of handling business comms. Having an eSIM-ready device means users can store and use multiple mobile plans at once, and switch seamlessly between them without needing to swap out SIM cards. Apple, for instance, says users of eSIM-compatible iPhones can install eight or more eSIMs on an iPhone and use two phone numbers at the same time.

This could come in handy in areas with poor or no signal, switching between personal or work contracts or when travelling abroad. Equipping your workforce with eSIM-ready devices, especially if you have team members that travel frequently or for long periods of time, gives them a more flexible, simpler way of managing their devices. Instead of juggling multiple SIM cards, or worse, using their UK SIM while abroad, users can simply switch between plans based on what makes sense in their current location.

Similarly, if employees switch between home and office working throughout the week, having an eSIM-ready device with a contract for work and for home can replace the need for a desk phone. Instead, it’s easy to switch between office and personal numbers without needing any extra technology.

Both eSIM adoption and consumer awareness of eSIM technology remains relatively low. However, with Apple’s latest announcement, it seems we’ll soon be resigning SIM cards to wherever-it-is you’re currently storing those old floppy disks and USBs. The consumer eSIM brings many benefits to service providers, consumers and businesses. It’s not a case of if you’ll use one, but when.